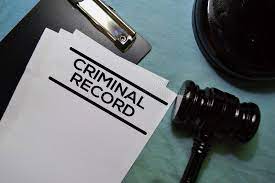 A company can still hire you if you have a criminal record, it is their choice.  Similarly, they can still hire you if you fail a drug test (most will not however).  If they ask if you have a criminal record, then you have to be honest with them.  If you lie, then they will find out and they will not hire you.  That would be a falsification of records which might be more of an issue than the actual crime committed.  Just be honest and open about it if asked.  I have had several students in the past with criminal records.  They have prospered and flourished because they learned from their mistakes and never gave up. They had a longer and tougher road, but they overcame it.  We live in a country where you can overcome anything if you are not lazy and you do not blame others.   No one is perfect and we all deserve second chances (if we learn from our mistakes).  Thank you.  Sime

Note:  Employers may also continue to drug test for marijuana, and if they choose to do so, employers can refuse to hire, can discipline, or can discharge a person who tests positive for marijuana, otherwise violates a workplace drug policy, or comes to work under the influence of marijuana.
One cautionary note – employers should exercise caution before terminating, disciplining, or refusing to hire someone for their use of medical marijuana.

While searching for an email I came across this video that might be helpful in the event someone may need it.

It’s from an attorney out of Detroit but it is very informative and outlines who is eligible for expungement; a “how to,” if you will.  At 8:30 the video gets into the “meat” of the eligibility.

Please don’t hesitate to continue referring people to me. I am more than willing to share my story and offer any advice I can; I just thought this would be valuable for you all.

Also, please note that there are guidelines that must be met in the State of Michigan; here is the link:

Briefly, here are the questions that need to be answered so that you don’t have to view the site in its entirety.

Do you have a federal conviction?

Do you have a criminal conviction in another state?

Do you have more than one adult criminal conviction in Michigan, excluding those for which judgment of guilt was deferred and excluding up to two minor offenses as defined in MCL 780.621(10)(b)?

Were you convicted of a felony or an attempt to commit a felony for which the maximum punishment is life imprisonment?

Is the conviction you want to have set aside a traffic offense?  A traffic offense is a conviction for violating the Michigan Vehicle Code or a local ordinance substantially corresponding to that act, which violation involves the operation of a vehicle.

Michigan Attorney General Dana Nessel during an online informational session Monday said several hundred thousand to a million Michigan residents may be eligible under the new expungement rules and will “no longer have to deal with the stigma and barriers posed by having a criminal conviction on their public record.”

Components of the law that call for automatic expungement of nonviolent misdemeanors after seven years and felonies after 10 years — if the resident has no additional convictions — won’t take effect until late 2022 at the earliest, and possibly not until 2023, Nessel said.

Under previous law, Michigan residents with up to two misdemeanors or one felony conviction for certain crimes were eligible to ask a judge to clear their record if they haven’t committed other offenses for five years or more.

The changes made by Clean Slate legislation include:

The waiting period prior to applying for expungement begins at the completion of a person’s sentence, probation or parole and if someone applies and is denied expungement, they must wait three years to reapply.

“Expungements can be and will still be a complicated legal process,” said Shannon Lucas, a director of legal services with the nonprofit Michigan Advocacy Group that is compiling pro bono attorney services and tool kits that the public may access to start the expungement process.

Nessel said her office is eager to assist the public with the process and applicants don’t need to hire an attorney.

“My office is also working to plan a series of expungement fairs once it’s safe for people to gather in person,” Nessel said.

It remains unclear if conviction-related travel restrictions, including to Canada, or gun rights will be restored with a successful expungement, since the agencies authorizing those activities access separate criminal databases.

“I believe this is a historic day in Michigan because this is the day that reality comes to bear that Michigan is a leader in the country” regarding expungement, said Michigan Lt. Gov. Garlin Gilchrist II. “Our administration new we had to take a new approach to criminal justice to reduce people’s contact with that system in the first place … and ultimately to prepare people for a chance at success after their contact was finished.”

Research conducted by the University of Michigan law school, recently published by the Harvard Law Review, found that people who receive expungements see a 23% increase in income within a year.

Some available expungement resources include: