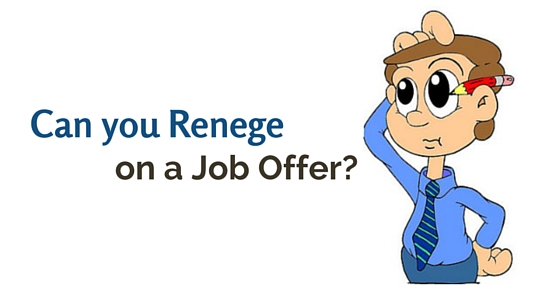 It has been brought to our attention that some students have been accepting internships/jobs, but continued to search for and accept other positions with other employers. This is reneging, a practice that is unethical and greatly frowned upon for students at Western Michigan University.

As noted, reneging is going back on a promise made. In other words, it is promising one thing and then pulling the promise back and not keeping your word. In the context of job searching, this means that you have given your word (verbally or written) that you have accepted a position, then at later date, pull out of the agreement. This unsavory practice has major ramifications.

How to buy time to decide?

Take your time. Can you ask for time to think about the offer? Yes, you can. However, understand that there are limits. Can you have weeks to think about it? No. A few days? Sure. Here is an example of how to ask for some time: “Thank you for the internship offer. I am excited about the opportunity to work at         XXXX      . This is an important decision, and I would like more time to consider the offer. When do you need an answer by?”

Why does it matter?

Reneging has a substantial negative impact to many different groups. Each is highlighted below.

The job search and commitment to the firm is likely one of the first major acts of your professional career. If you renege on your commitment, you are likely putting your own

personal brand in jeopardy. As you enter into the business world, it probably seems as though this will be brushed under the rug. However, the field you are about to enter is very small and people talk. There is a large possibility this tarnish is going to follow you. You do not want to start your career off with unethical behavior.

Ultimately, one student’s poor decision will reflect upon the entire University. On the negative side, if an employer suffers from students reneging, they will quickly stop looking at WMU as a source for future students. Not only are you harming the WMU brand, you are harming current and future WMU students.

The practice of reneging likely seems like an act that has little impact. That is wrong. The employer that you have originally committed to has invested considerable resources into recruiting you. Consider the time and travel that recruiters put into recruiting you. Or, perhaps the company paid to have you come to their facilities and reimbursed you for your travel. In many recruiting cases, it certainly would not be a stretch to say that a company has invested thousands of dollars in you before you start your first day. Further, if you renege on the company, it now has to scramble and try to fill your position with someone else.

Without question, when you renege on an offer, you have harmed your own brand. This is something that can potentially follow you throughout your career. Further, there could be internal penalties.

If you accept a job offer, both verbally and in writing, stop searching for other positions. You should also contact any firms that you have been in discussions with and let them know you are officially off of the job market.

If you have a dilemma, please reach out to the ISM/Supply Chain faculty. Any of them will be happy to help regarding your situation and can provide guidance.

Finally, please keep the following in mind for your job search:

A student recently shared a story about reneging: A family member had reneged on a company after signing employment documentation. The company pursued the individual and sued the family member. That is a testament as to how critically employers view reneging.

Milkround’s research showed that more than half (53%) of internships result in job offers, but 72% of the people who received an offer from their internship declined it.

One employer shared that they typically see four to five percent renege but this year that has jumped to more than eight percent.

In the United States, 17.3 percent of job offers—over 1 in 6—are rejected, according to Glassdoor data, reflecting a steady increase in offer rejection rates over the last few years at a time of growing competition for talent.

As many as 28% of candidates said they accepted a job offer but then backed out, a new Robert Half survey found.
The reasons candidates gave for reneging on a job offer were: received a better job offer (44%); received an acceptable counteroffer from a current employer (27%); and heard bad things about the company that made the offer (19%).
The top five locations where most candidates reneged on job offers were San Diego; San Francisco; Chicago and Houston (tied for third place); Austin, Texas; and Miami, according to survey results.
https://rh-us.mediaroom.com/2019-05-15-Cold-Feet-Survey-Shows-28-Of-Professionals-Renege-On-Job-Offer-After-Accepting

An alternative take: I’ve seen some students end up in very unsatisfying job situations, strictly because they felt that reneging was violating a serious moral code. So what’s the moral difference between reneging before a job starts vs. jumping ship shortly after starting the job? The first case is much less costly for the company.

Let’s consider what companies should be doing in the era of reneging (i.e., better understanding the market and why candidates choose to renege, leaving the door open to 2nd choice candidates to easily replace those who renege, etc.). How many times do companies pull job offers from candidates after having made an offer and having it accepted? I have to think that this practice does far more brand harm to a company than any career harm that is likely to follow an individual for reneging on a particular job offer.

I understand the reputational harm you feel may come to the school/program because of students that renege, but that seems like more of an empirical question–a good one worth researching. Also interesting would be whether there are differences in reneging behavior between schools and what might cause that.

It’s a difficult situation and it arises more now because a) companies are pushing quickly to make job offers and putting pressure on candidates to say yes quickly because they obviously have many roles to fill, and b) the students have options and they have invested heavily in their own future and want to look at all of those options before they have to make a decision.

So when they feel the pressure to make a decision quickly they make that decision but consider it temporary.

It’s a very American cultural situation that we consider the changing of our minds related to a job to be classified as something negative like reneging. Cultures with more long-term orientation consider that any decision should be reconsidered as the circumstances change and there is nothing unethical about changing the parameters of a decision when the parameters of a environment change.

I don’t encourage students to accept and then reneg, however I always tell them their first loyalty needs to be to themselves and a decision that is best for them. It is what the company will do every time.

I agree, Sime. Turning your back on a promise is not appropriate.

The *only* scenario where changing your mind is appropriate is when you discover new information during the onboarding process that surfaces that the company is unethical or work environment is toxic. Years ago, I once did it due to how poorly I was already being treated before I started during the onboarding process. When I called the HR manager to renege, the corporate toxicity manifested itself with a 15 minute insulting barrage from the HR lead.

But aside from that one exception case, a promise made is a promise kept.

Please reach out if you have more questions. Thank you. Sime